Posted by Chris Chedgey on September 13, 2006 | Featured | No Comments

Un-monitored, the complexity of a code-base increases with its size. Jboss and Struts are perfect examples. However monitoring complexity helps you keep complexity debt under control, or even down to zero.

If you publish the last couple of years worth of releases of your project to a Structure101 repository, you’ll probably see something like this in the Structure101 Tracker web application: 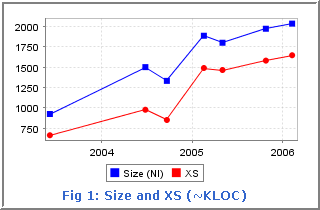 Structure101 matches the amount of XS to the lines of code that cause it. Unless someone pays attention to it, the same team will tend to code-in a consistent degree of complexity debt as they go – in this case they’re running at a not-unusual but alarming 80%.

Struts shows a similar chart running at about 57% XS: 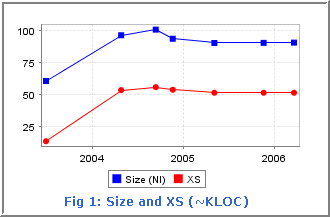 I was in with the Prime Carrier guys yesterday. They’ve been tracking their excess complexity for several months now and it really shows.  Here’s the chart for one of their projects: 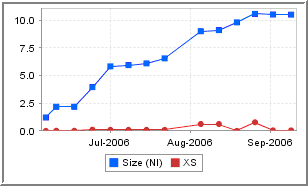 As you can see, XS is hugging the zero line even as the size of the code-base grows. This is why we call it “excess” (XS) – it really is excessive and totally avoidable. Occasionally a cyclic dependency (tangle) or fat class may get into the build, but it’s flagged and usually fixed during the next iteration.

They recently released a new version of another product under severe deadline pressure and consciously decided to pick up a bit of short-term debt. As you can see, they’re already paying it back before it incurs too much “interest”: 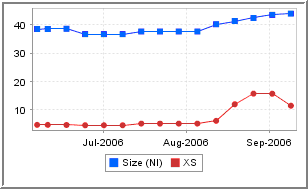 These are a great bunch of hard-nosed developers who are keeping the code-base clear of debt so they can focus on the principal – customer requirements.